Skip to content
NetEnt is one of the major software developers on the market. Its aim is to offer products that will meet the preferences of various players. Mini Roulette is not an exception. It offers a new interesting approach to the more than three-centuries-old classic game.
Have A Favourite Roulette Game? 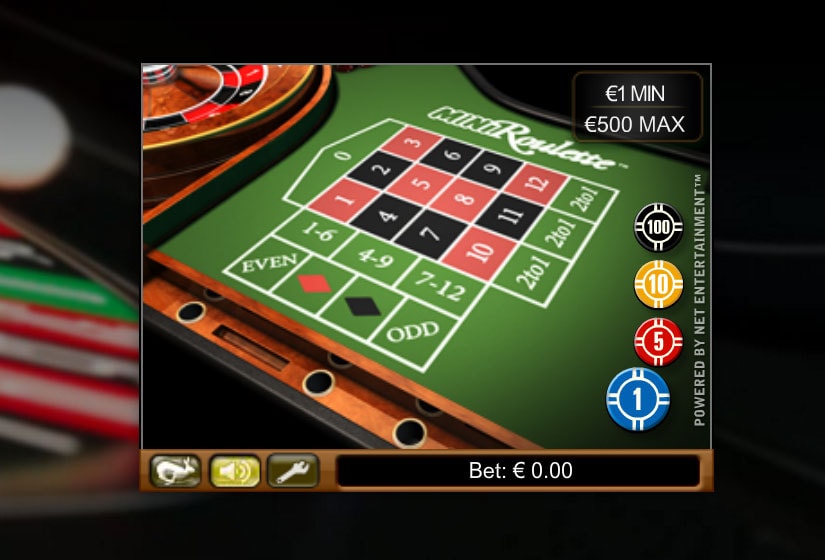 Despite the fact that it utilises European format of roulette, it comes in a smaller size and has 13 virtual pockets. The game has a slightly lower RTP – 96.15% than traditional European variants. As you might guess, the odds of predicting which virtual division the white ball would land in are much higher. Therefore, the payouts are also different.

Mini Roulette is perfectly suitable for players who do not have much experience playing roulette. It will teach you the basics in no time, so if you are looking for a new, interesting roulette game, give this one a try!

The name of the game is self-explanatory. It is a compressed version of the worldwide-known variant of European roulette. But instead of 37 pockets, it has 13 – one green sector, which is home to the 0 and the others are divided between the numbers from 1 to 12. As you might already know, the chances of predicting the outcome are much higher, so the payouts are smaller.

The minimum you can bet is £1 and the maximum is £500. The payouts for the inside and outside bets are: Straight – 11:1, Split – 5:1, Street – 3:1, Corner, Column – 2:1, Half-Dozen, Red/Black, Odd/Even – 1:1. The payouts are smaller than those of European roulette but the chances of winning in Mini Roulette are significantly higher due to the small amount of numbered virtual divisions on the table.

Mini Roulette offers the so-called “Refund on Zero” rule – if the ball lands in the 0 sector, half of the bets placed on the other numbers are returned to the player. However, wagers placed on 0 have a normal payout.

The guys over at NetEnt have not emphasised on superb graphics and 3D animations. Instead, the company has took an interesting approach to classic roulette. The game has a sleek and neat design. It is organised in such a manner that it prevents online gamblers from distraction. The Spin and Clear buttons are not constantly visible, they only appear after players have placed their bets. The interface is user-friendly, pretty standard and will not pose as a threat to newbies, who are unfamiliar with the rules and options. In addition, the features are tailored in accordance with the game’s small size.

Mini Roulette offers 4 chips, each with a different credit value as follows: £1, £5, £10, and £100. They are situated in the right corner of the screen. After clicking on the Spin button, the wooden-style roulette wheel rotating in clockwise direction appears in the middle of the screen and displays the winning virtual pocket.

Despite the rather average quality of the graphics and animations, this version of roulette offers trouble-free gaming sessions with no constant disconnections or any other issues. It is suitable for novice players due to the fact that it can be played in Practice Mode, in which there are no real-money bets.

Those players who expect a few special features regardless of the compressed size of the game will not be let down. NetEnt has managed to incorporate some options and special features that could hardly be found in similar variations of roulette. They will be appreciated by online gamblers because these features will definitely improve the overall gaming experience.

Mini Roulette offers the Fast Play option. It can be activated by clicking on the brown kangaroo button at the bottom of the screen. It will practically remove the spinning animations and will immediately display the result of each round. This will definitely make the game more fast-paced. The option is preferred by those players who want to stress on placing bets rather than watching the spinning of the roulette wheel.

The game history panel shows the result of the last 5 spins.

In order to ease the players, the game can be played in a browser on condition – players should enable the Flash Player extension. In addition, the game is fully mobile-compatible. It is optimised to run smoothly with no lags and in a trouble-free manner on all devices regardless of their operating system.

NetEnt’s Mini Roulette has gained a lot of popularity since its release on the market in 2012. The game offers an interesting alternative to regular roulette variations and spices things up a bit with its 13 virtual pockets.

It has higher odds of guessing the winning divisions but it is also true that the payouts are way smaller than the ones found in the European version of roulette. The graphics can be described as pretty average in terms of quality but they will definitely not put off players who are looking for a straightforward game with decent payout.

The rather high 3.85% house edge is still way better than the one in American roulette, for instance. The user-friendly interface, solid and trouble-free gaming experience are just some of the key advantages of the game. So, if you are looking for a pretty simple game that will teach you the basics, do not hesitate and try NetEnt’s Mini Roulette.